Setting up an Apache Aurora/Mesos Cluster with Vagrant

Over the past 1.5 years, I’ve been given the unbelievable fortune to work with some of the most awesome people I’ve ever worked with in my life. My work at twitter.com has taken me from working with a few hundred machines at a time at my last job, to thousands. In order to have all these machines work together, you need to have some kind of cluster management system. Without such a system, whether home grown, purchased, or hacked together, you are doomed to be awake during your whole pagerduty rotation. In this article I will try to point out parts of the basic system that I work with every day.

None of this would be possible without the hard work of every single developer on the Apache Aurora and Apache Mesos projects. Their hard work has made all this possible. I’ve personally seen these people work their butts off, both on all the work inside the company, and then again in order to open-source all the software they have written. I’m very proud to be able to work beside these people. 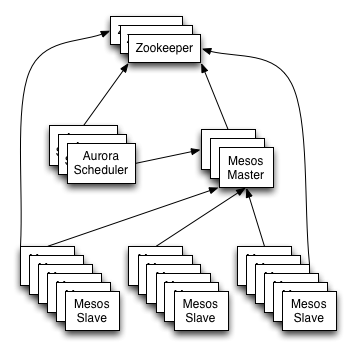 I will attempt to describe some of the basic building blocks of an Apache Aurora cluster. In the setup that we will use here, there will be four basic types of machines that comprise an Apache Aurora/Mesos cluster:

As this diagram shows, all the pieces of this cluster management solution have been designed in such a way that you can stand up multiples of each type of machine, and they will back each other up. In this tutorial we will only stand up one of each kind to save on resources.

As a quick architectural overview, each of these machines has a specific function within the cluster. In particular,

There will be a fifth machine that we will be working with today:

In our setup, we will be using Vagrant to provision and setup our virtual machines. There are any number of tutorials out there to help you learn how to setup a basic Vagrant environment. In particular, our machines are all based off the vagrant precise64 base image. Make sure you have the correct version of this image added to your vagrant box list. One of the following commands should do the trick, depending if you’re using the virtualbox or vmware fusion providers:

At this point, you should be able to get a basic vagrant precise64 image up by doing something like this:

If this does not work, then you will need to solve your vagrant issues first. Please use Google, or your favourite search engine to search and find a Vagrant tutorial to get you started.

Once Vagrant has been set up, the next step is in acquiring all the code you will need. The Apache Aurora code is all available via git at the github mirror. Make sure you are in a clean directory, and let’s checkout the code:

At this point, you have a full copy of the Apache Aurora source code, along with the Vagrant configuration required to build and run a basic Apache Aurora cluster.

In order to get a development environment up, and build all the development tools, we stand up the vagrant devtools image. Vagrant will clone the precise64 image, update it, and then proceed to build all the necessary software by fetching dependencies and building each in turn. This may take some time.

Once this finishes, we can see all the artifacts this has created. You can see these artifacts in the dist directory.

At this point, we are ready to start standing up the actual machines that will make up the cluster and its supporting infrastructure, using all of the software artifacts that were built by standing up our devtools image.

In order for all of the pieces of our cluster to find each other, they can all be configured to use ZooKeeper. This has some additional nice properties, such as being able to stand up multiple redundant master and scheduler machines, as they will use ZooKeeper to coordinate leader election and manage fail-over between multiple masters and schedulers. In our setup, we will be standing up only one of each, but having a ZooKeeper instance up makes growing the cluster a trivial affair, and standing up a ZooKeeper machine is fairly simple.

The next logical type of machine to get operational is an Apache Mesos master. This will be the machine that will keep track off all the slaves, and provide a programmatic interface to the cluster for any frameworks running on Apache Mesos. One of these frameworks is the Apache Aurora scheduler, which we will get working a little later on. (There are other frameworks, such as Marathon). Let’s stand up our master, and verify that it is working.

At this point, we should have a working master. We can also hit some other useful endpoints with our web browser, such as:

The master web interface gives a convenient method to check up on the cluster and get some basic information about what frameworks are using what resources, as well as which Apache Mesos slaves and resources are available. Since we have not started any slaves, your master should be showing zero slaves, and be a pretty much empty page. Let’s change that.

Let’s get a slave up and running, and verify that it is ready to serve its master. While vagrant is standing up the slave (as shown next), feel free to look at the master web interface, refreshing it periodically. You should see the Slaves - Activated portion of the interface show you that there is a single activated slave as soon as vagrant has stood up the image.

If you click on the Slaves tab at the top of the master web interface, you should see a list of the slaves and the resources they have. We can query the master json endpoint directly and see that we have a single slave as well:

At this point, we basically have a minimal Apache Mesos cluster up and running. There is no framework (scheduler) running, and no tasks running within the cluster. With no scheduler running, the cluster is pretty much useless. However, this is the base required to now be able to run any Apache Mesos framework on top of this cluster.

We finally get to the stage where we can stand up Apache Aurora, an Apache Mesos framework, or scheduler. The scheduler will be able to launch jobs and give a much higher level interface to the Apache Mesos core.

If the above curl command returns that the framework is registered, then the Apache Aurora framework has contacted the Apache Mesos master, and registered itself. You can see this from the Frameworks Tab on the Apache Mesos master web interface as well. The scheduler provides a rich web interface that can be very useful for both customers looking at their jobs, as well as administrators to help them debug any issues with the cluster. In particular, the following endpoints will likely prove useful:

As you can see, there are a number of things available under the root of the tree. Feel free to explore. :)

Thankfully, the Aurora developers have included an example job that can be launched in this cluster.

As you can see, this job does not do a whole lot on its own, but it should give you the beginning of a glimpse into what can be done. This particular job will simply run a shell that types hello world to stdout. It asks for half a CPU, 128MB of ram, and 128MB of disk to be allocated to the task. Let’s create this job, and see what happens.

This may be a bit confusing at first, so let’s break it down. First we ssh into the vagrant machine that is running the scheduler. Then we run a few commands to demonstrate where the aurora command line client is located, and a way you can invoke it to give you information about what version of the client you are interacting with, as well as a way to look at the help for the command. Next we change our directory to be in the place where the sample job configuration file is. And then, we launch the job using the aurora create command, which takes two main arguments.

The jobkey selects the particular job you want the aurora command to work with from the job configuration file. If you look closely, aurora tries to be helpful, and provide you with a direct URL for the job you just created. However, there seems to be a small bug here, as the client is simply printing out the machine name, as opposed to the IP address. This may be fixed by the time you get around to looking at this. In any case, you can look either look at the scheduler page, and click the links down to the job specific page, or you can hit it directly by going to http://192.168.33.5:8081/scheduler/www-data/prod/hello.

On this page, you should see a single active task for the job hello. In particular, if you click on the “show details” button, you should be presented with more information about the resources this job has asked for. Clicking on the little “+” sign in the status column of the active tasks section should give you more information about the task states this particular task went through. The same line will also tell you which host this task is running on. If you click on the host link, the web browser will take you to the Thermos observer running on the particular Apache Mesos slave running this task, and will allow you to inspect this particular task in more detail.

Each Apache Mesos slave that is running tasks from an Apache Aurora framework will likely be running these tasks using Thermos. Thermos itself is really two parts:

If you clicked on the host link in the previous section, you will now be on a web page that shows you several things about the running task. In particular, you should be able to click on the stdout link, and see what this task is printing to stdout.

You should also notice that this particular page is specific to this one task. If the task dies, and gets restarted by the scheduler, it will get a new task id, which means that there will be a different URL for the currently (newly) active task. You can also go to the Thermos Observer’s top level page on a slave http://192.168.33.4:1338/. As you can see, the task you started earlier should be listed here as well.

Feel free to browse through the various web interfaces and endpoints during all of this, as well as after you’ve killed off the job. This will make you more familiar with the interface and recognizing the various states a job and task can be in (alive, dead, etc).

Next we will stop all the vagrant images:

Note, I’m running a vmware fusion provider for Vagrant, your output may look slightly different if you are running the VirtualBox provider. As you can see, all five machines are still up and running. Using vagrant halt will shut down all of the images for you.

More documentation for much of this, as well as the configuration reference, getting started guide, user guide, and tutorial can be found on the GitHub clone of the Apache Aurora repository:

GitHub should nicely render all the markdown documentation. The documentation might be a little rough in some places (it was open sourced along with the code not too long ago), but it is voluminous, and very well written. If you’d like to stand up a more substantial cluster, you could use the Vagrant images to get you started, or you could use Elastic Apache Mesos to stand up your own cluster inside AWS.